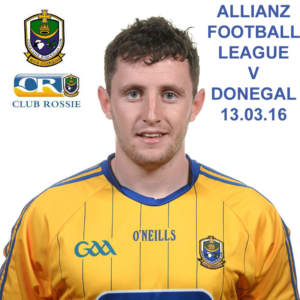 Fergal O’Donnell and Kevin McStay have named their Roscommon Senior Football team to face Donegal in the Allianz League on Sunday and it is the same starting 15 which overcame Down in the last round.

The panel in full is as follows:

Become a Club Rossie Business Member and you could see your Company Logo on the Jersey for the last game of the League against Dublin. See here for details

Sunday’s game is “all-ticket” Adult Tickets €10, Under 16s €5. Tickets are available from the Roscommon GAA Office (Open Friday from 10am to 4pm), from all SuperValu stores in County Roscommon.

CLG Dhún na nGall Wish to advise Roscommon supporters travelling to the Match in Letterkenny on Sunday to give themselves extra travel time due to the major road works on the N15 between Donegal Town and Ballybofey.